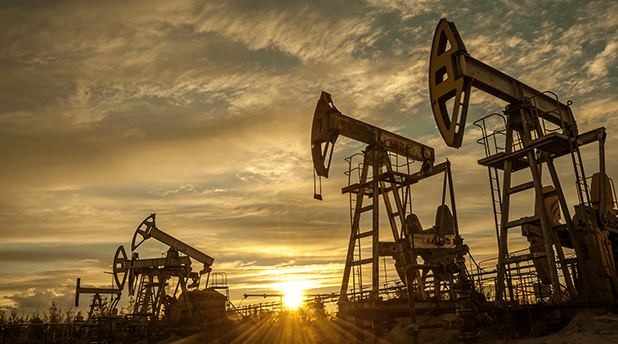 By now, the basic outline of recent oil market events is well understood. Since it was recognised in late January 2020, COVID-19 virus disruptions have sharply curtailed global demand for crude oil and refined products, generating perhaps a 3% or larger decline, sending the price of oil sharply lower. In the face of falling demand, Saudi Arabia convinced OPEC to cut production by 1.5 million barrels per day (mbpd), contingent on the condition that Russia agreed to participate. Russia declined. Their companies did not want to miss out on cashflow or to lose market. After Russia’s refusal to join in production cuts, the Saudis announced over the weekend of March 7-8, 2020, that they will be increasing production and would slash prices.

What investors are just beginning to grapple with are the consequences of the OPEC + Russia coalition falling apart. History offers some insights. Indeed, the events of the past week are reminiscent of two previous episodes both of which had far reaching effects on the world economy, markets and geopolitics; the collapse of oil prices in 1985-86 and 2014-16.

First, in 1985, Saudi Arabia lost patience with supporting the global price of oil amid widespread cheating from other OPEC members. Between 1985 and 1986, the Saudis increased production from 3.778 to 5.255mbpd. Oil prices crashed from around $30 per barrel to as low as $10. With a brief exception around the Persian Gulf War, oil prices did not recover for over a decade (Figure 1).

The mid-1980s crash in oil prices deprived the Soviet Union of export revenues and probably hastened its collapse. Lower oil prices also cut the flow of funds to Iran and Iraq. Out of funds, the two countries ended their seven year long war in 1987. The war left Iraq with staggering debts, while low oil prices left it without means of making good on those loans. Iraq’s dire financial situation probably contributed to Saddam Hussein’s decision to invade Kuwait and seize its oil fields in the summer of 1990.

In the US, the mid-1980s collapse in oil prices sent the oil patch into a severe recession at the same time as the rest of the United States prospered in its midst of the 1983-1990 expansion. Unemployment in Texas rose from 5.8% to 9.2% in 1985-86. In Louisiana it rose from 9.6% to 13.1%. At the same time, the general weakness in commodity prices meant agricultural prices were depressed, which contributed to severe distress for US farmers. Many small banks, especially savings and loans institutions, failed. The pile up of bad debts, including high yield securities, helped to trigger a US recession in 1990 91, after the Federal Reserve had raised rates.

The second episode was in late 2014. OPEC decided to increase production to regain market share lost to soaring US energy production. Oil prices plunged from $90 to $26 per barrel by early 2016 and never came close to fully recovering (Figures 2). This time, the global consequences were less dramatic than in the mid-1980s. Even so, Russia went into a recession and growth slowed across the Middle East. The currencies of commodity exporting nations followed oil prices lower. These included the Australian and Canadian dollars, the Brazilian real, the Chilean and Colombian pesos, the Norwegian kroner, the Russian ruble and the South African rand. The prices of agricultural goods such as corn, soybeans and wheat also plunged for reasons both directly and indirectly related to the move in oil.

Figure 1: Except briefly during the Gulf War, oil prices did not recover from the 1985 crash until 1999 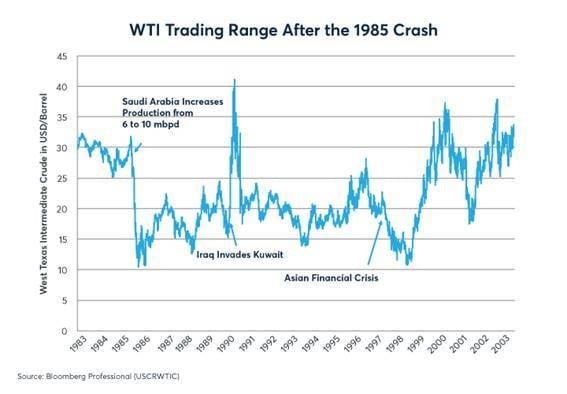 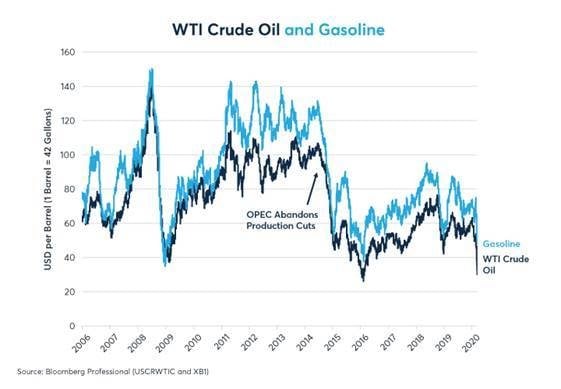 If Saudi Arabia makes good on its threat to increase production, the economic and geopolitical consequences could be no less profound this time around.  Here is what we think that they might be:

CONSEQUENCES FOR US OIL SECTOR

Following the oil price collapse in 2014-16, exploratory drilling in the US declined sharply.  Prior to Saudi Arabia’s decision to boost production, there were 1,500 operating rigs in the US.  Within two years that number had fallen to around 300.  When oil prices partially recovered, some of those rigs came back on line getting the rig count close to 900. Even before the January-March 2020 sell off, however, the rig count was in sharp decline and, if oil prices were to continue to fall, the rig count might plunge (Figure 3).   Also, credit spreads widened in 2015, jobs growth slowed and, not surprisingly, energy stocks underperformed.

US oil production did not fall as dramatically as the rig count in 2015-16 (Figure 4).  Oil companies halted exploration, but existing wells kept producing.  Older and less productive rigs were retired.  Rig productivity soared as the newer and most productive equipment was deployed to the most promising wells.  Productivity per rig rose.

Production focused on the Permian region which has the least expensive connections to oil pricing centers in Cushing, Oklahoma and the export terminals in Houston (Figure 5).  What is not clear is if a second productivity revolution can occur a second time with a much smaller number of rigs (Figure 6), and the rig productivity increase depended in part of increasing innovation and capital expenditures in the oil services support industries, and that has diminished greatly. 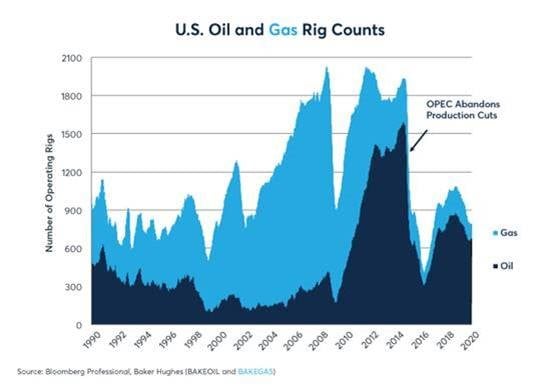 Figure 5: After the 2014-16 crash, capex focused on the pipeline-connected Permian basin 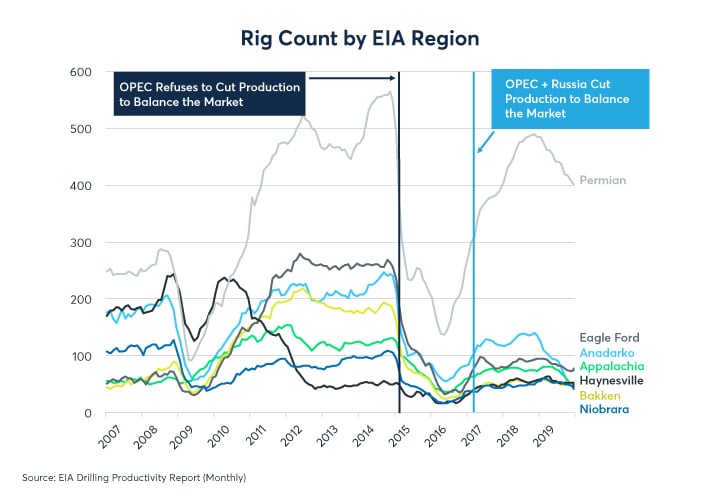 Figure 4: US oil production dipped only temporarily after the 2014-16 crash in energy production 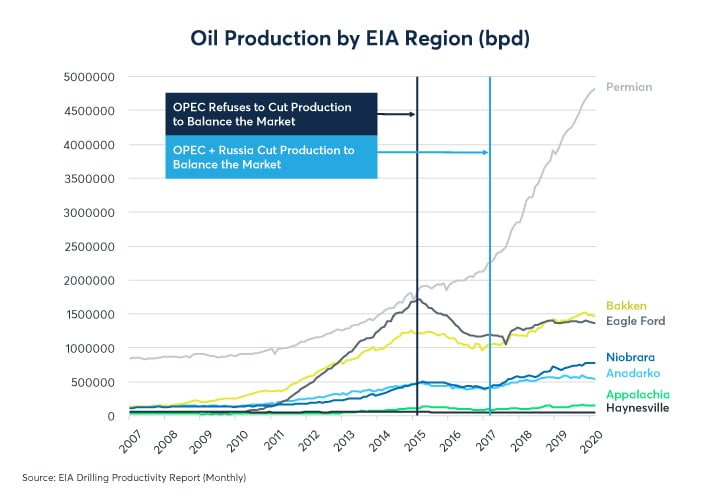 Figure 6: The 2014-16 crash coincided with a productivity revolution but it might not happen again 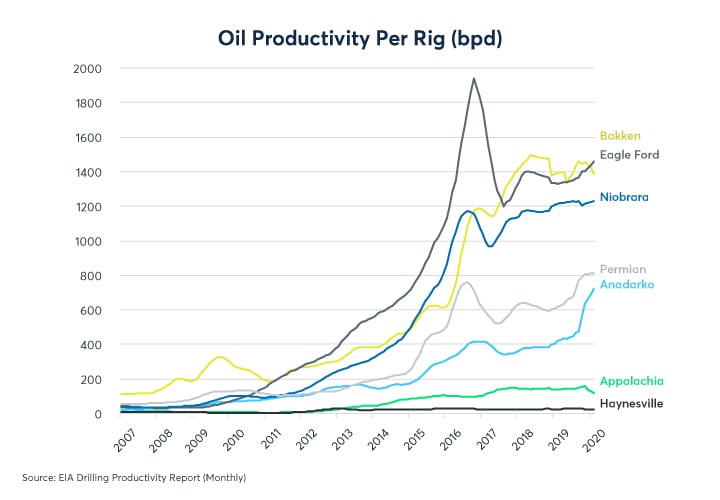 Corn, soy and wheat prices all show a strong co-movement with oil prices for both direct and indirect reasons (Figures 7-9).  Oil prices directly influence agricultural goods prices for two reasons: production costs and biofuels.  Modern agriculture is an energy intensive business.  Roughly ten calories of fossil fuel energy go into each calorie of food.  Indeed, fossil fuels are present at every stage of production from planting to harvesting, to processing and distribution.  Moreover, pesticides are made, in part, from petrol biproducts and natural gas is involved in the making of fertilizers.  As such, falling energy prices tend to lower the cost of production for farmers.

Unfortunately, lower energy prices are far from being purely good news for farmers.  Some agricultural goods are also used as biofuels that are blended into refined products.  Ethanol comes from corn in the US and sugar cane in Brazil.  Vegetable oils are also sometimes included in final fuel blends.  All these goods track oil prices. 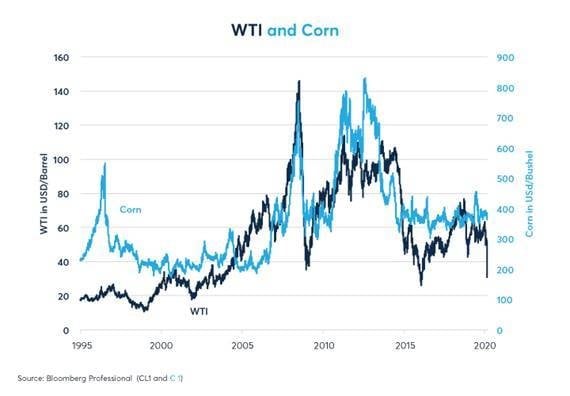 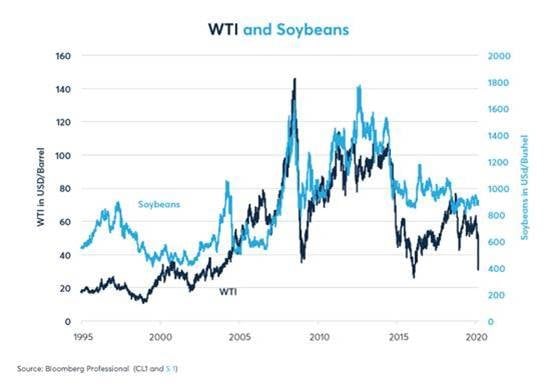 Figure 9: Even wheat, which has no use as a biofuel, tends to trade crude oil prices

Lastly, there is one critically important and indirect reason why oil prices influence the value of agricultural goods: their impact on currency markets.  Over the past two decades, the US has ceased to be the dominant exporter of corn, soy and wheat as its own domestic consumption of these goods has increased and as production of corn and soybeans have soared in South America while corn and wheat production boomed in Russia and the Ukraine.  Given the newfound importance of countries like Brazil and Russia, perhaps it not surprising that agricultural goods prices often move roughly in line with their currencies (Figures 10-12).  Their farmers help to set the global marginal cost of production.  If their currencies weaken because of the recent decline in oil prices, this could put US farmers in a tough spot.

Figure 10: Corn may be vulnerable to another leg down in the Russian ruble 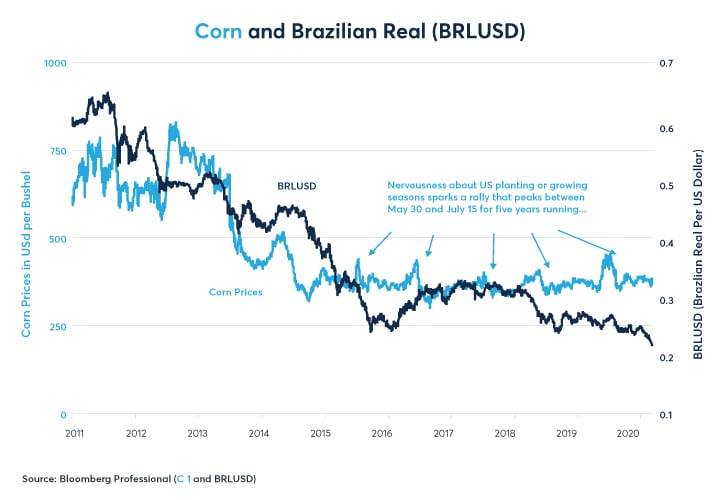 Figure 11: Soybeans tend to suffer if the Brazilian real is weak 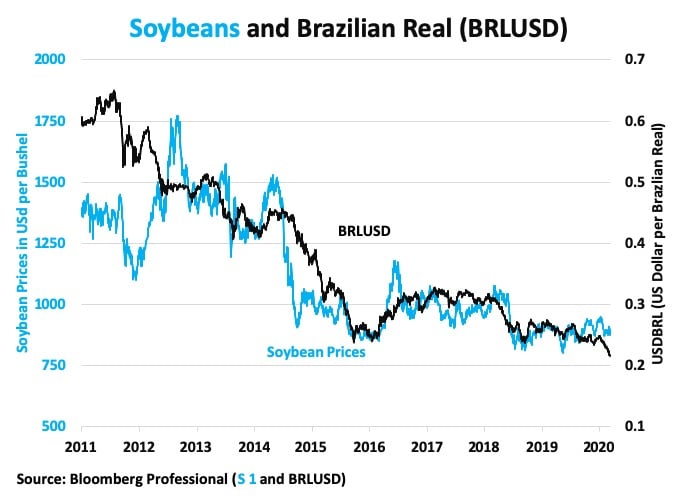 Figure 12: Wheat may weaken if the Russian ruble falls in response to lower oil prices 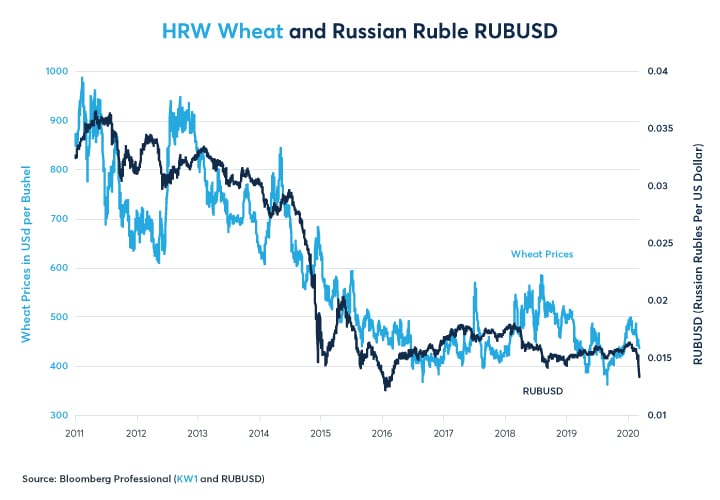 Three currencies, the Canadian dollar (CAD), Norwegian krone (NOK) and the Russian (RUB) ruble often move in tandem with oil prices.  All three plunged versus the US dollar in the period from 2014 to 2016 and, like oil, none of recovered since (Figures 13-15).  That said, CAD and RUB have decoupled somewhat from oil prices.  What remains to be seen is how they might perform during a long period of depressed oil prices.

In 2014 and 2015, it was not just oil prices that moved currencies: a surging US dollar rallied against nearly every currency including the Yen (JPY) and the euro (EUR).  At that time, the US budget deficit was shrinking while Europe and Japan were still mired in post-crisis economic problems.  Now the US budget deficit has grown past $1 trillion per year and bigger deficits are on their way.  In addition, the Federal Reserve (Fed) has cut rates back towards European and Japanese levels.  In this US environment of rising budget deficits and lower Fed rates, the dollar might experience weakness and not a generalized rally like the previous oil price drop episode (Figure 16).  This time EURUSD and JPYUSD are holding their own or even appreciating.  Indeed, the Eurozone and Japan are massive net importers of oil, as is China.  For the Eurozone, Japan and China lower oil prices will buffer the negative impact of the COVID-19 virus by lowering their import bills and helping consumers.  In fact, only about 20 countries are net exporters of oil.  For the other 160 nations, lower oil prices are net benefit.

Figure 13: CAD has decoupled somewhat from the price of oil 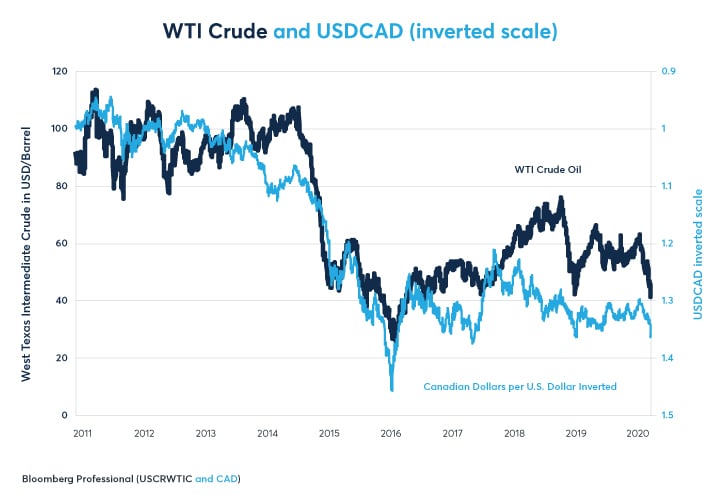 Figure 15: NOK could weaken further if the price of oil continues to go lower 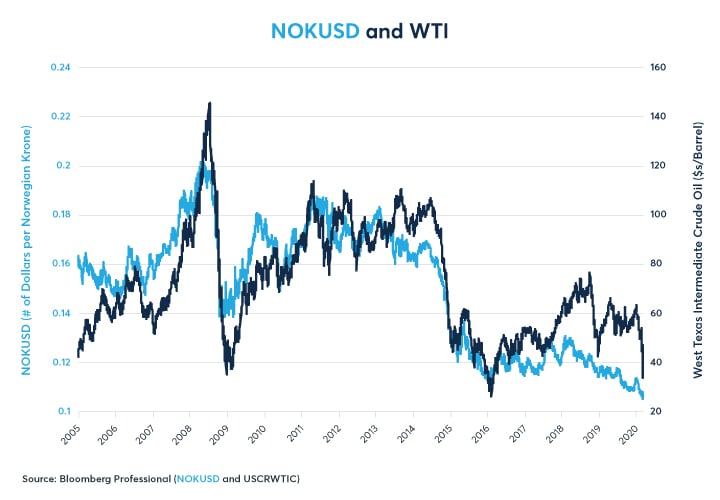 Figure 14: The ruble still broadly tracks the price of oil 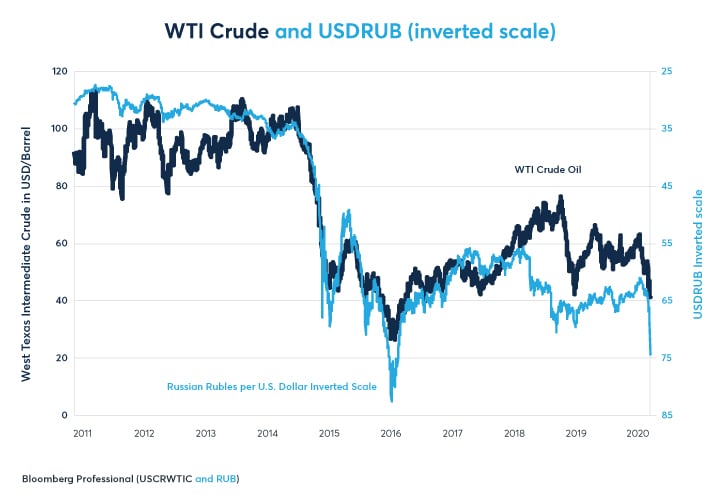 Figure 16: A 5% of GDP US budget deficit + a 2% trade deficit plus lower rates, might prevent a dollar rally 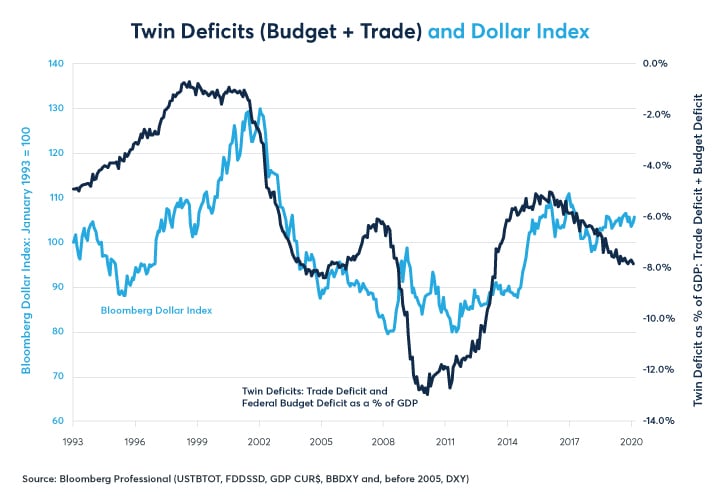 Perhaps the most unpredictable consequence of the collapse in oil prices will be its geopolitical ramifications, particularly in the Middle East which is the theater of two regional proxy wars: Syria and Yemen.  In Syria, lower oil prices may make it more difficult for oil exporters Iran and Russia to justify their support for Bashar Al Assad’s regime to domestic audiences.  Meanwhile, the other major participant in the conflict, Turkey, is a beneficiary of lower oil prices.  A crash in oil prices adds a new element of unpredictability to an already devastating conflict.

Next door to Syria, Lebanon has been swept by protests and has announced it will default on 1.2 billion EUR of debt coming due this month.  Lebanon’s public-debt-to-GDP ratio is 155%.  In the past it has relied on financing from places like Saudi Arabia, the United Arab Emirates and Qatar.  Recently, those nations have become more reluctant to lend, in part because they are not as flush with cash as they were back in 2014, before the previous crash in oil prices.

In Yemen, where Iran has been backing Houthi-militias against the Saudi-supported government, the dynamics could change as well.  Saudi Arabia will not benefit from lower oil prices, but it has colossal foreign exchange reserves and is flush with cash over the ARAMCO IPO.  By contrast, Iran has been strapped for cash even before oil prices crashed.  The fall in oil prices will further diminish their ability to support regional allies.

Lower oil prices could also change political dynamics within oil producing nations such as Algeria, Nigeria and Venezuela.  Algeria and Nigeria have successfully navigated delicate political transitions in recent years, but lower oil prices will put hardships on broad segments of their populations and will not be helpful for stability.  Both nations have a history of civil war (Nigeria in the late 1960s; Algeria in the 1990s) and occasional acts of terrorism.  Finally, Venezuela has two governments.  Recently Nicolas Maduro’s government has been gaining the upper hand following a slight economic rebound that coincided with the government introducing limited free market reforms.  A lower price of oil, however, will cause more deprivation to an already impoverished population.

Despite increases in green energy, in 2020, oil is still the lifeblood of the world economy, fueling nearly all transportation and making modern life possible through its use in agriculture, plastics and many other domains.  As such, the collapse in energy prices is likely to have far reaching and highly varied consequences. What is particularly surprising about the current situation is that it combines elements of the 1998 and 2008 demand shocks as well as 1985 and 2014 supply shocks.  To increase supply at a time of falling demand is unprecedented.