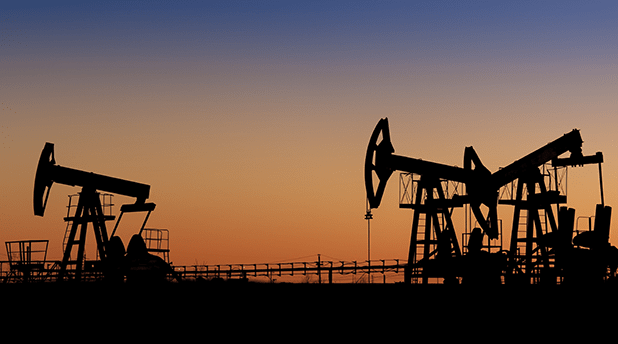 By BellPotter Marketing 30 April 2020 No Comments

While all eyes have been on the huge fall in the outright price of crude oil, the oil options markets are also sending plenty of signals about market expectations for the longer-term impact of COVID-19.

The price of benchmark WTI crude oil fell from an average of over $57 per barrel in 2019 to reach the low $20s by the end of the first quarter of 2020.  Global demand for many of the refined products made from crude oil – particularly gasoline and jet fuel – has collapsed in the wake of the restrictions on movement introduced to combat the spread of COVID-19.

Although prices have generally trended sharply downwards, levels have also varied wildly in recent weeks, driven both by news about the progress of the virus as well as by discussions – then an agreement — between oil-producing nations about reductions in output.

The most commonly watched standard for volatility is 30-day at-the-money implied volatility (ATM IV), which measures the market’s perceived volatility over the coming month.  Over the past 12 years, this 30-day ATM IV has averaged 34% for WTI options, whereas in the four weeks from March 9, it reached an average of 134%, with a peak of 185% on March 20. 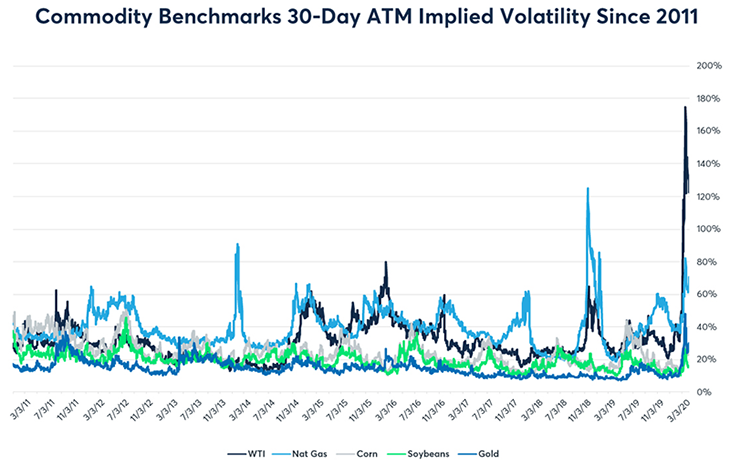 The oil market has rarely experienced such elevated implied volatility numbers.  In the past 12 years, there have been only four occasions – all during the financial crash of December 2008 – when implied volatility breached 100%.  In contrast, there were 20 consecutive days where implied volatility was over 100% in March and early April 2020.

Market participants are not expecting price action to calm down any time soon.

The picture is the same further out along the curve.  The 360-day ATM provides an indicator for how participants are viewing the next year.  Its current level is 45%, compared with a 12-year average of 28%, indicating that traders believe that market volatility one year from now will remain significantly higher than historic averages.

These are truly unprecedented levels of implied volatility for the oil market — and for any commodity market.

No other commodity has seen implied volatility at the levels that crude oil has reached recently.  In the last 10 years, neither gold or soybeans have never breached 50% for implied volatility, while corn has touched 50% but never gone beyond.

Benchmark Henry Hub natural gas futures are typically considered to be the most volatile of the major commodities because of the sudden impact of cold weather on demand in the winter months.  Even so, the highest 30-day ATM implied volatility for natural gas in the past 10 years was 125%, which is still 60 points below the recent record set by WTI options.

The fallout from COVID-19 represents an unprecedented challenge for the global energy industry and the risks are being mirrored in the dramatic shifts in the futures price of oil.  This brings record volatility in the short term, and it is clear from the longer-term measures of implied volatility that no one is expecting a return to normal any time soon.