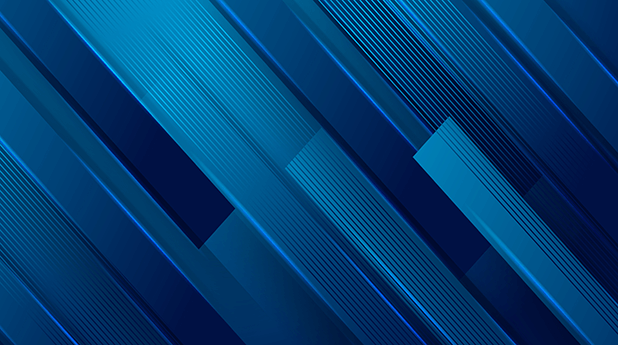 The U.S. economy is sending confusing signals. Private sector employment is still 7.6 million jobs below its peak (Figure 1) but inflation rates have soared to their highest levels in over a decade (Figures 2 and 3). Retail sales and durable-goods orders are off the charts (Figures 4 and 5) even as supply chains are entangled in pandemic-related bottlenecks. The Federal budget deficit has expanded to a post-World War II record of nearly 20% of GDP, is roughly twice its size at the height of the global financial crisis, and about four times its largest deficits from the Reagan era (Figure 6).

Figure 1: At the pace of the past six months, employment might not fully recover until 2023 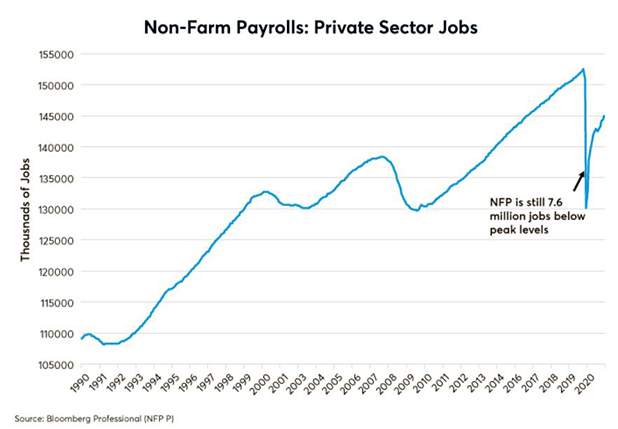 Figure 2: Headline CPI is at its highest since 2008 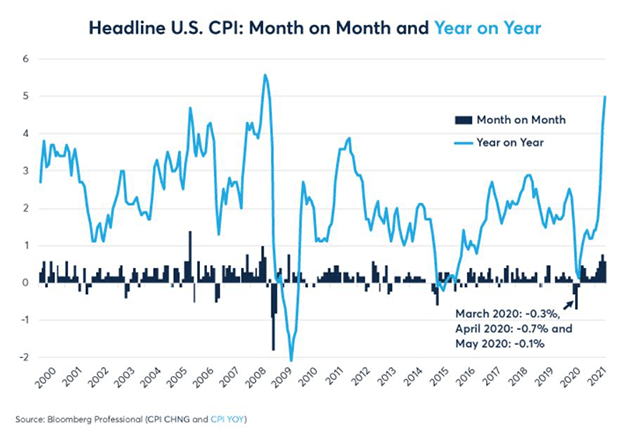 Figure 3: CPI ex-food and energy is at its highest since 1992 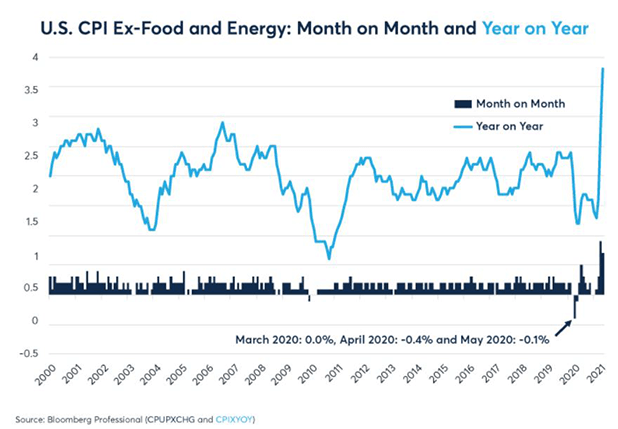 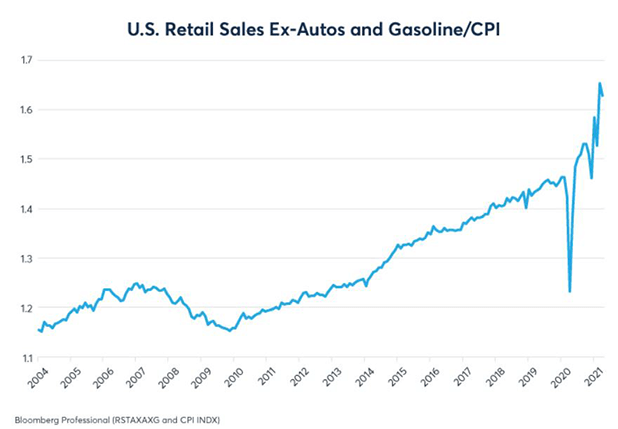 Figure 5: Capital expenditure is rising at its fastest pace in decades 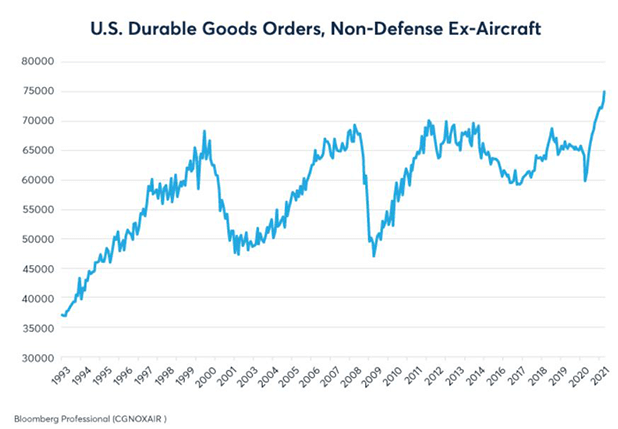 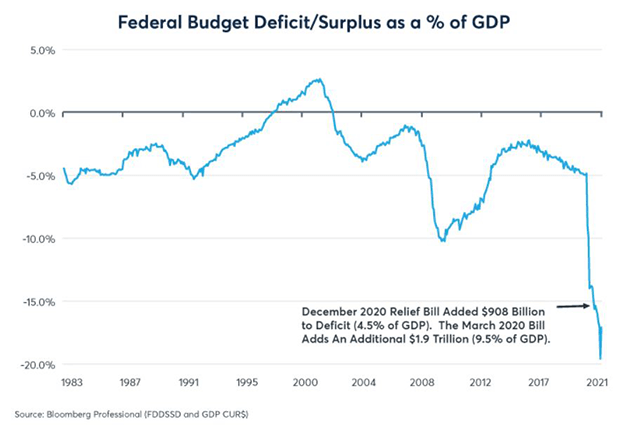 Yet amid these crosscurrents, fixed-income market investors appear to be relatively unconcerned. Bonds yields rose substantially in February and March this year, but have been moving sideways since, remaining at levels that would have been considered historically low before the pandemic. 10Y and 30Y bond yields are very close to where they ended in 2019, and are far below where they were in 2010 as the previous economic expansion got under way (Figure 7). The apparent lack of investor concern about economic overheating may be due in part to assurances from the Federal Reserve (Fed) that the rise in inflation is “transitory” and that the central bank will maintain low short-term rates and quantitative easing policies for a substantial period. 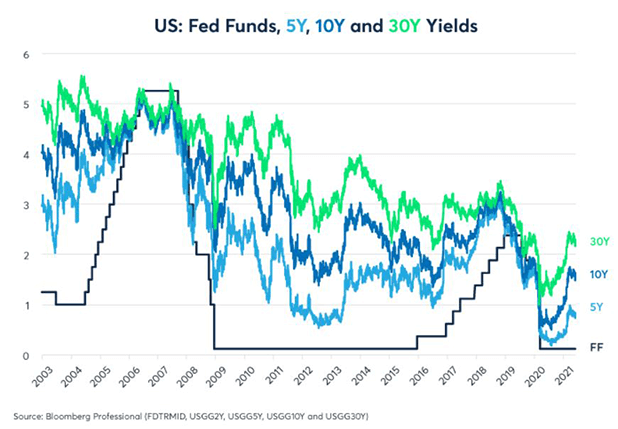 Comparing to the situation a decade ago, the differences are remarkable. Coming out of the 2008 crisis, investors appeared to fear a rapid return of inflation and Fed tightening. In 2010, 5Y bond yields rose to nearly 3%, 10Y Treasuries crossed 4% while 30Y bond yields approached 5%. As of early June 2021, their yields are at less than half their 2010 levels.

What’s odd is that in 2010 there were significant reasons to expect a slow economic recovery. Household wealth had plunged by 20% and was slow to recover (Figure 8). Savings rates had risen slightly – from about 4% to around 7% — but household balance sheets, strained by high levels of personal debt and collapsed housing prices, were in poor shape. State and local finances were severely strained. 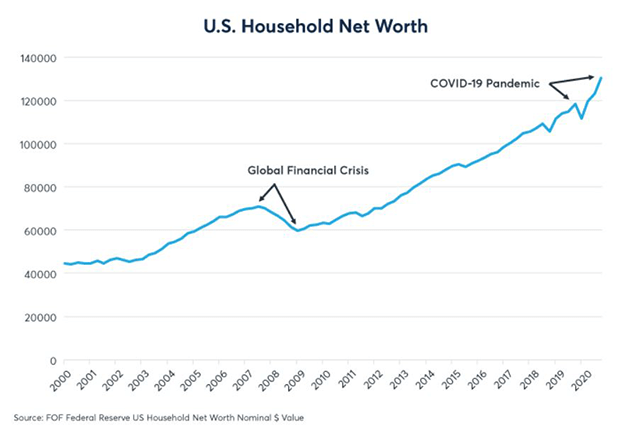 Today the situation could hardly be more different. Household wealth has soared 15% since the beginning of the pandemic, savings rates have surged to 20% of personal income (Figure 9) and state and local finances are remarkably healthy, especially after the most recent COVID-19 relief package. An additional tranche of infrastructure spending is awaiting Congressional approval. Yet, despite extraordinary signs of economic strength, bond yields remain in the cellar.

Figure 9: Savings rates edged up during the GFC and tripled during the pandemic 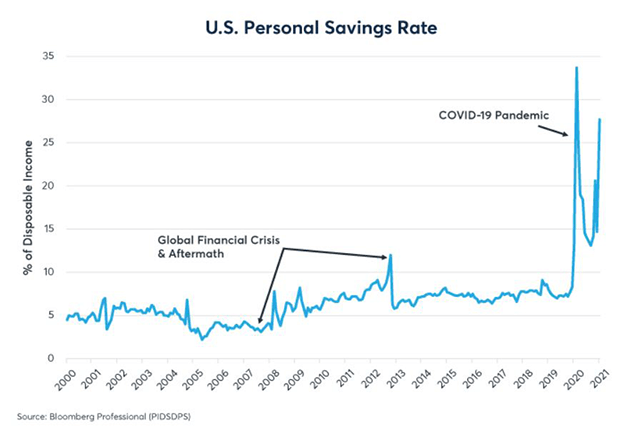 The rise in yields earlier this year came from one source: rising inflation expectations. Investors went from pricing average annual inflation over the next decade at 0.5% a year ago to just below 2.5% currently. As it turns out, investors correctly anticipated the recent surge in inflation, which has come as a result of supply-chain bottlenecks, rising commodity prices and base effects – the rolling of negative inflation numbers from last year off the rolling window of year-on-year inflation calculations (Figure 10).

Figure 10: The Q1 rise in yields resulted from an expansion of break-even inflation spreads 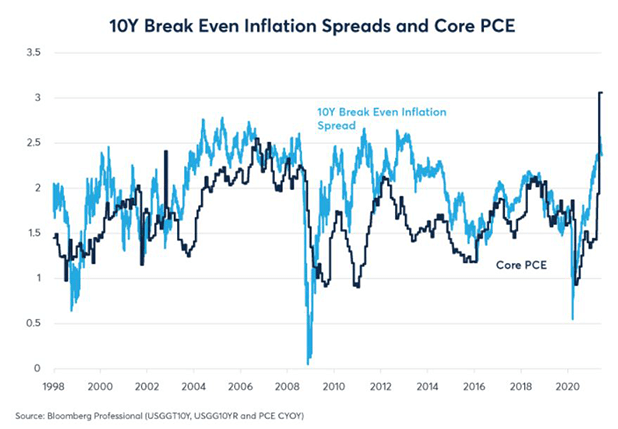 But while inflation expectations have risen, real yields have not. Yields on 10Y inflation protected U.S. Treasuries remain near negative 0.85%. These are levels last seen in 2013, preceding the so-called “taper tantrum” when the Fed announced its intention to begin pulling back on quantitative easing (Figure 11). 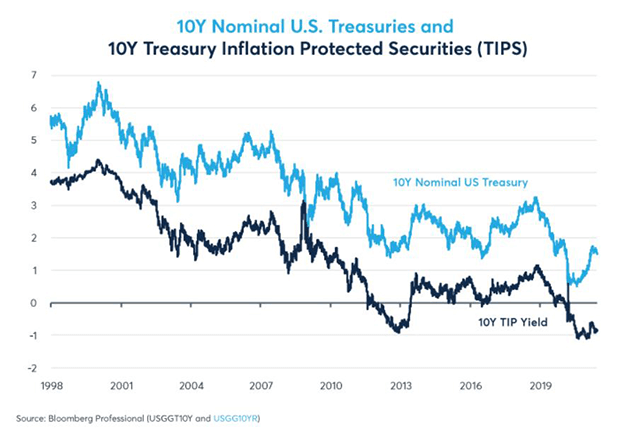 Bond options prices are reflecting some nervousness. At-the-money (ATM) options on 5Y and 10Y Treasuries Long Bond futures are off their lowest levels from 2019 and 2020, but are hardly trading at historically exceptional levels (Figures 12). The same is true further up the curve with options on Treasury Long Bond futures (Figure 13). 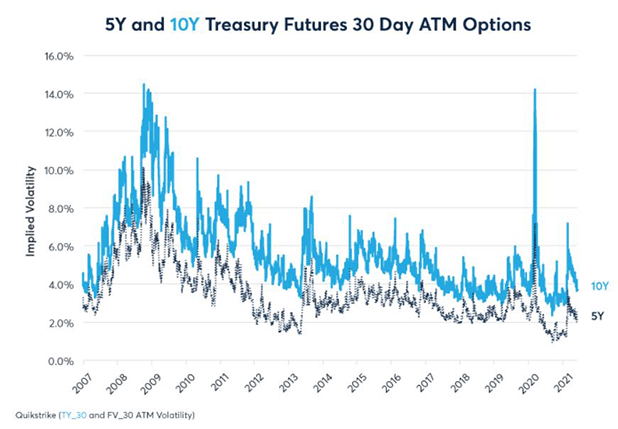 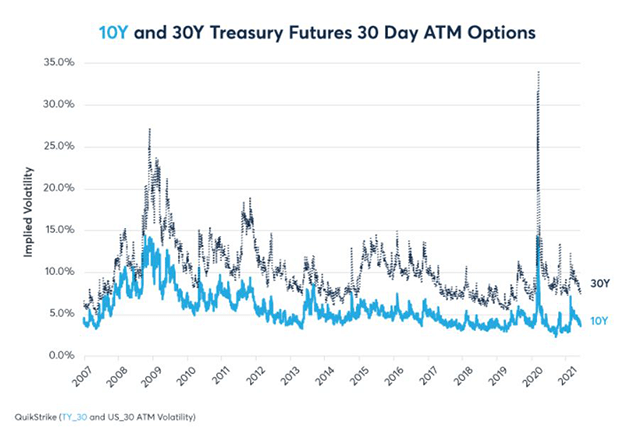 ATM bond option implied volatility doesn’t tell the entire story, of course. Looking at out-of-the-money options, bond option skews tell a slightly more nuanced story. Five-year and 10Y bond options traders are more concerned with downside price risk than to the upside, but this is nearly always the case when Fed rates are close to zero bound (Figures 14 and 15). Influenced by Fed statements that the U.S. central bank does not intend to follow the European Central Bank and the Bank of Japan down the path to negative rates, investors appear to assume that the Fed would not cut rates. In the minds of most investors, this appears to give Fed rates only two directional options: sideways or upward. Since fixed income prices and yields move in opposite directions, that means the preponderance of extreme risk to bond prices, in the view of traders, must be downward. That said, 30Y bond options show little skewness (Figure 16). Apparently, even with an unprecedented boom in consumer spending, rising inflation and supply constraints, 30Y bond options investors see upside and downside risks as being roughly evenly balanced. 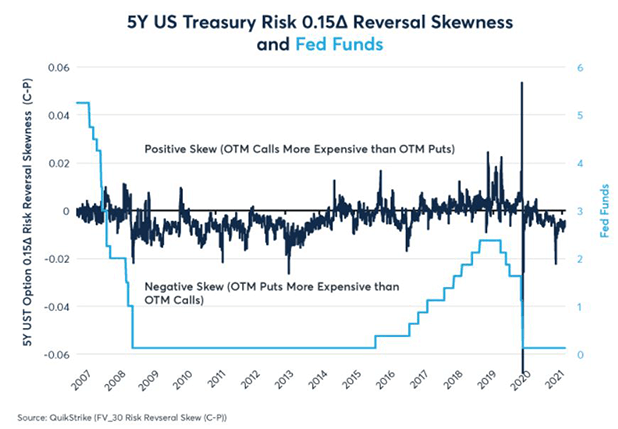 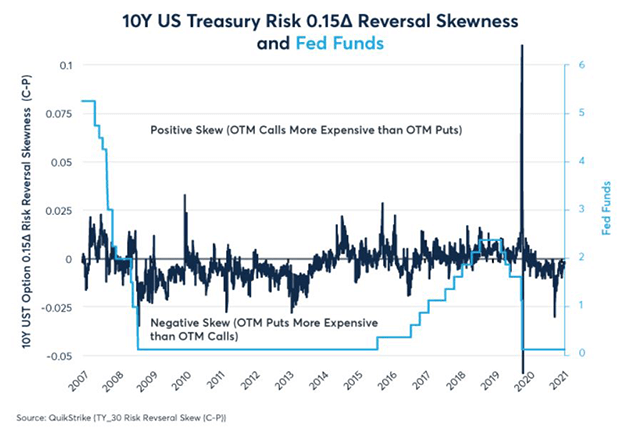 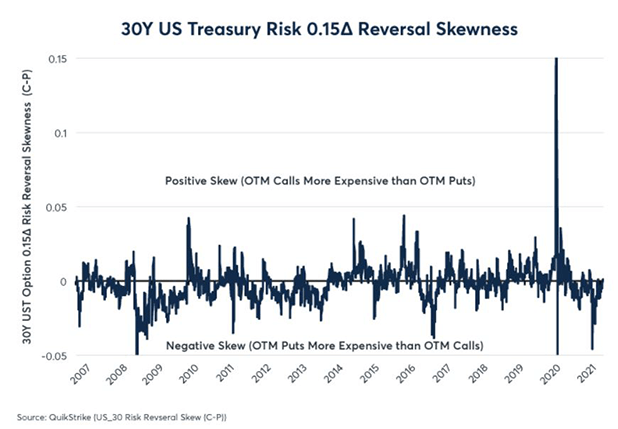 But is it possible that bond options investors (and bond investors more generally) are under-pricing the amount of risk in the markets? What happened in 2013, amid much more sluggish economic growth and much tighter fiscal policy, might provide some warnings. The “taper tantrum” sent real yields soaring from around negative 0.85% to positive 0.85%, doubling the yield on 10Y Treasuries nominal bonds form 1.6% to slightly over 3%.

Could such a move happen again today? It’s hard to say. On the one hand, a weak labor market that it still 7.6 million jobs below peak employment might keep the Fed on its easy monetary policy path for a while. On the other hand, super-charged retail sales, soaring household wealth and saving rates, rising vaccination rates and strong demand for capital equipment orders might encourage the Fed to pull back on quantitative easing (QE) sooner than investors currently anticipate. If that turns out to be the case, it could make for a volatile summer and fall for the U.S. interest rate markets. How things unfold will depend crucially on whether the recent rise in inflation proves to be transitory or not, and it may take many months for enough evidence to accumulate to prove the case one way or another.

That said, there is a counter argument. Even if economic conditions do argue for potentially higher bond yields, U.S. Treasuries remain by far the highest yielding of major bond markets. They have higher yields than even eurozone sovereign bonds with much lower credit ratings (Figure 17) and comparable bonds in Australia, Canada, Japan, Switzerland or the U.K. (Figure 18). Even if economic conditions might be pointing towards higher yields, these other bond markets show the extent to which U.S. Treasury yields could potentially fall if they were to come in line with their peers in the event that persistent inflation fails to materialize or, if the U.S. equity market suffers a sharp correction and creates a strong flight to quality. 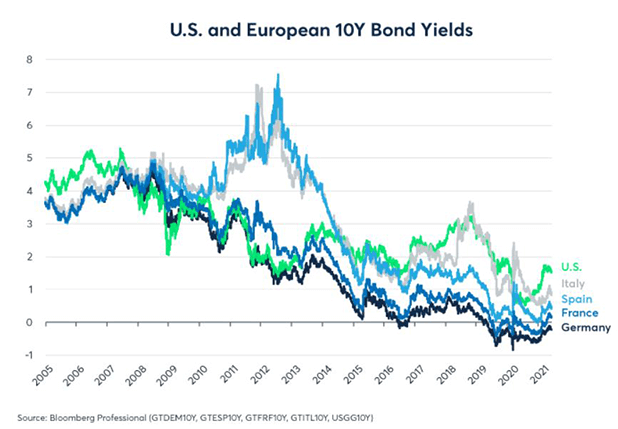 Figure 18: U.S. Bonds are the highest yielding in the developed world 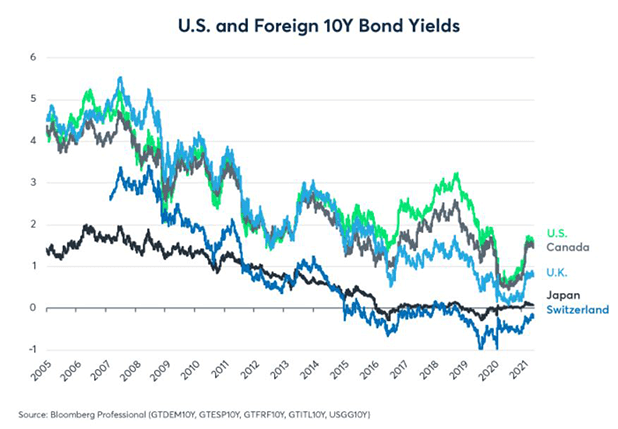 Given the size of the U.S. budget deficit and the bond markets’ apparent dependence on Fed buying to keep a lid on long-term rates, the fact of such strong spending, investment and inflation data might at some point give investors pause.